017: The Four Agreements and Mindset Blind-Spots

At the beginning of the year, I like to re-read books that impacted me in the past.

This year, I decided to read again The Four Agreements by Don Miguel Ruiz.

It’s a beautifully written short book that calls our attention to the many self-limiting beliefs we hold in our lives.

I like to call them Mindset Blind-Spots, because we are not aware that we hold them, yet we filter our experiences through them.

According to Don Miguel Ruiz, if we learn to replace these self-limiting beliefs by The Four Agreements proposed in his book, we can change our lives for the better.

These Four Agreements are:

1. Be impeccable with your word

4. Always do your best 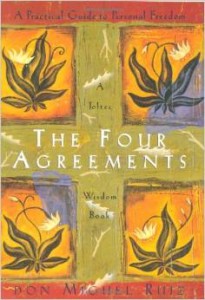 In the next episodes of this podcast, I will focus on these agreements.

Today, I want to explore the concept of agreement as a self-limiting belief which we hold without awareness.

This is why I consider these self-limiting beliefs as Mindset Blind-Spots.

Yet, unlike the visual blind spot I described in Episode 6: Blind Spots – We All Have Them, we are not born with Mindset Blind-Spots – we learn them.

It’s how we typically learn how to live and how to dream.

This often happens at a subconscious level.

We start to believe in certain rules as truisms that we don't even consider to challenge.

These can be rules like saying “Thank You” when someone gives us as a gift.

To take as fact that if someone says we are “dumb”, “ugly”, “bad” that also must be true.

I see this process of domestication as part of being human, living in an organized society. Yet, I like the idea of living in a society where I have some say about the rules that govern it.

Luckily enough, I lived all my live in countries ruled by democratic regimes, where theoretically, we have some say on the rules.

Yet there are so many implicit and subtle rules that are not written, but are as strong or even stronger that the written ones.

I want to have a say on these rules too. Even if it's to agree that I want to keep following that rule.

This is vital, because often these are the rules that govern our personal lives.

I know that I cannot be in a state of constant analysis – that would lead to analysis paralysis. I would be so overwhelmed that would prevent me to do any meaningful action.

I see this as a three-step ABC process:

Step 1: Awareness – Become aware that we have many self-limiting beliefs that make us react in a certain way

Step 2: Breath Out – Remind myself that I have the power to press the pause button. I don’t have to react, I can choose how to respond

Step 3: Create My Response (following my own agreements)

I speak about this on Episode 8: React or Create–Your Choice.

“Between stimulus and response there is a space.

In that space is our power to choose our response.

In our response lies our growth and our freedom.”

I love this quote because, we usually see a stimulus as something that activates a response almost automatically.

There – between stimulus and response – Frankl sees a space.

A brief space where we have the power to choose our response.

A brief space where we can learn to be creators of our lives and not just be reactors.

This is very powerful and transformational.

My challenge for the my next 7 days is to focus on awareness – Step 1 of the ABC process described.

The goal is to become more aware.

Whenever possible, I will write down my awareness or feelings about the situation.

Want to join me in this 7-day Awareness Challenge?

Love to hear your comments and learn about your experiences.

To learn how to Subscribe, and/or Rate & Review this or any other podcast click the links below:

Via your Computer (Mac or PC)

No comments yet. You should be kind and add one!