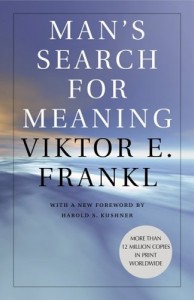 I recently re-read Frankl's book “Man's Search For Meaning.” It's really a powerful book, no wonder that there are more than 12 million copies of it circulating around the world! The book is divided into two parts. Part One–of less than 100 pages–is an account of Frankl's experiences in several concentration camps during the Second Word War. These experiences are written almost as notes in a diary. It's sad, moving and inspiring at the some time. In his words:

“They may have been few in number, but they offer sufficient proof that everything can be taken from man but one thing: the last of the human freedoms–to choose one's attitude in any given set of circumstances, to choose one's own way.” p. 66

“It is this spiritual freedom–which cannot be taken away–that makes life meaningful and purposeful.” p. 67

“It is a peculiarity of man that he can only live by looking to the future…And this is his salvation in the most difficult moments of his existence, although he sometimes has to force is mind to the task.” p. 73

“As we said before, any attempt to restore a man's inner strength in the camp has first to succeed in showing him some future goal. Nietzsche's words, “He who has a why to live for can bear with almost any how,”…Whenever there was an opportunity for it, one had to give them a why–an aim–for their lives, in order to strengthen them to bear the terrible how of their existence. ” p. 76

“Whatever we had gone through could still be an asset to us in the future. And I quote from Nietzsche: “That which does not kill me, makes me stronger.” p. 81-82

Part Two and the Postscript–shorter than 60 pages–are where Frankl summarizes is therapeutic model, Logotherapy. He defines it as a meaning-centered psychotherapy. In his words:

“Let me explain why I have employed the term “Logotherapy” as the name for my theory. Logos is a Greek word which denotes “meaning.” Logotherapy… focuses on the meaning of human existence as well as on man's search for such a meaning. according to logotherapy, this striving to find meaning in one's life is the primary motivational force in man.” p. 98-99

Following with his words:

“Thus far we have shown that the meaning of life always changes, but that it never ceases to be. According to logotherapy, we can discover this meaning in life in three different ways: (1) by creating a work or doing a deed [the way of achievement or accomplishment]; (2) by experiencing something or encountering someone [the way of nature and culture, and the way of love]; and (3) by the attitude we take toward unavoidable suffering.” p. 111

“When we are no longer able to change a situation–just think of an incurable disease such as inoperable cancer–we are challenged to change ourselves.” p. 112

“But let me make it perfectly clear that in no way is suffering necessary to find meaning. I only insist that meaning is possible even in spite of suffering–provided, certainly, that the suffering is unavoidable. If is were avoidable, however, the meaningful thing to do would be to remove its cause, be it psychological, biological or political. To suffer unnecessarily is masochistic rather than heroic.” p. 113

I hope these excerpts have stirred your curiosity about reading this book, and more importantly that they give you some light for your own personal journey and search for meaning!

Get Every Episode
Automatically!

Expand What Is Possible

Fear of Speaking with Linda Ugelow

Power of Commitment with Frank Wagner

The Sandwich Generation, Aging, and Community with Shain Khoja

You Can’t Push through Uncertainty with Steven Feinberg

Through the Lenses with Raj Bandyopadhyay

Ready for Ana to unlock the potential
of your next event?